Now that we had all of the “sisters” ( as Raegan called them) settled into their new home, we were anxious to start collecting eggs. Oh I expected they’d be a little traumatized from the move so by my calculations from zero chicken experience I figured about a week. Well that week came….and went, no eggs. We all watched and waited, I whined on Facebook, threatened to grill them, put a golf ball and even a fake egg in the nesting boxes, but still no eggs. I was told they probably wouldn’t lay until spring ( they started their molt soon after we got them) or even ((gasp)) might never lay again. It was a stressful time y’all. But of course right when I had given up and about a month after we had gotten them ( I promise it felt like much longer) we got our first egg! 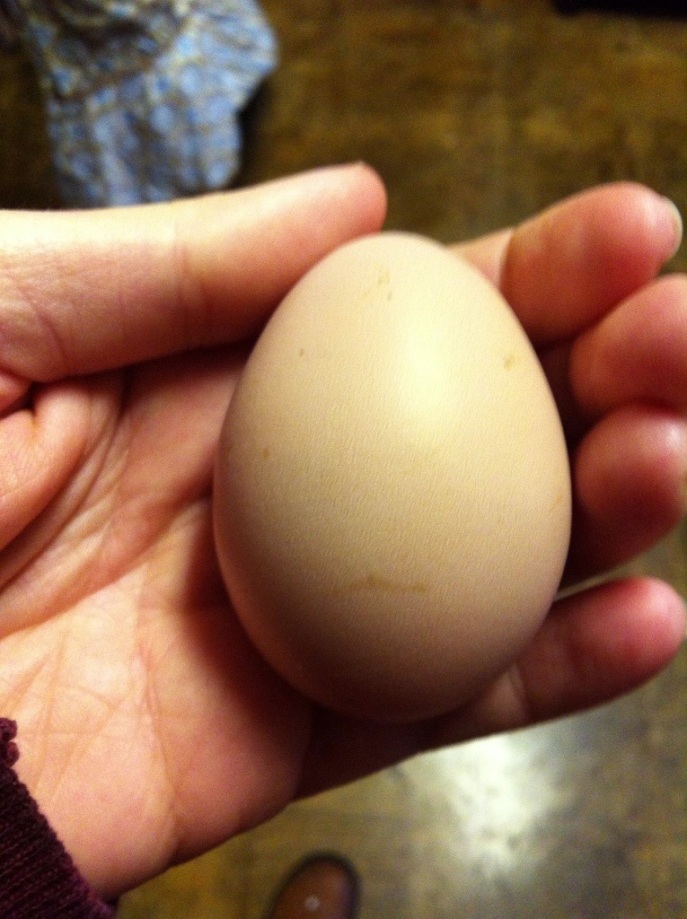 It was a really cold day, Aaron came in front outside and called me over. He told me to hold out my hand. I nervously obliged and he placed something very warm in my hand, an egg, just laid, I almost cried, then I took a picture, posted it on all the important social media websites and of course text pictures to family members. It was a glorious moment.
The next day they laid another 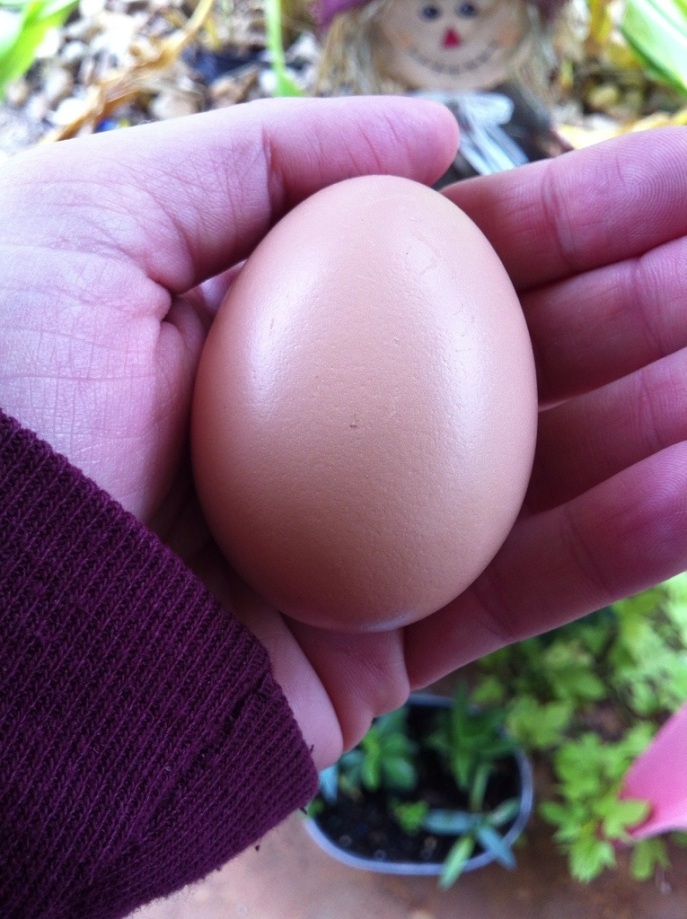 so I posted a picture of that one too, then I celebrated by making cornbread and a collage to post. 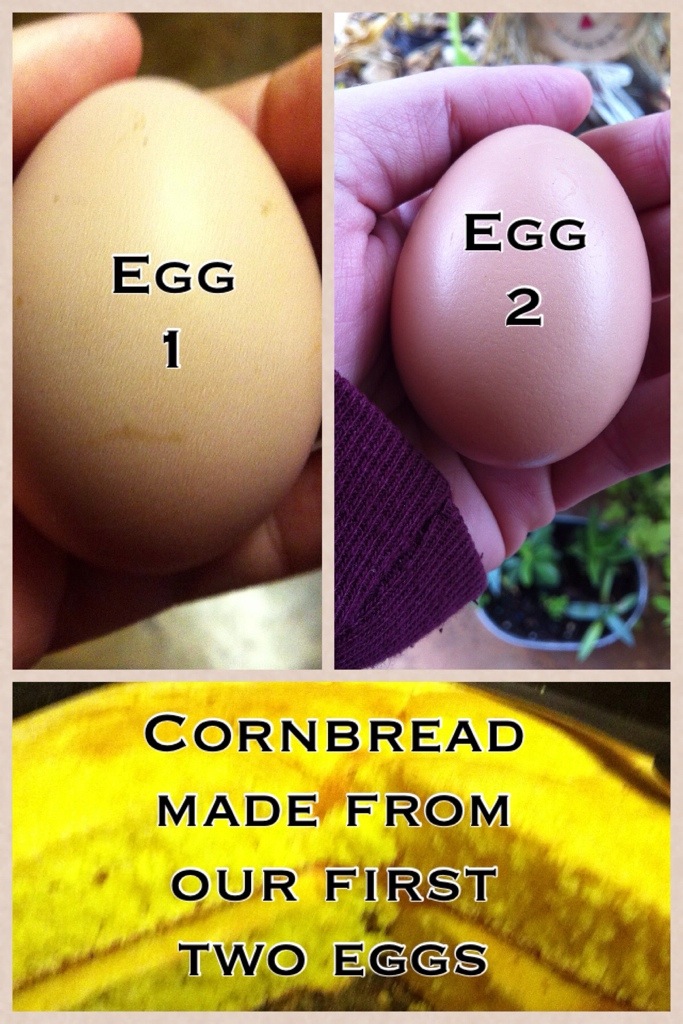 The “sisters” have been laying almost daily ever since but we like eggs and four hens just can’t keep up, plus I really needed, okay maybe wanted some Plymouth Barred Rock hens. The second week in January we ordered 10 pullets from Ideal Poultry and I had absolutely no idea what to expect, nor was I prepared. The mail lazy knocked on my door with a box full of cheeping chicks. When I opened the box I saw 10 black chicks and 15 yellow chicks. 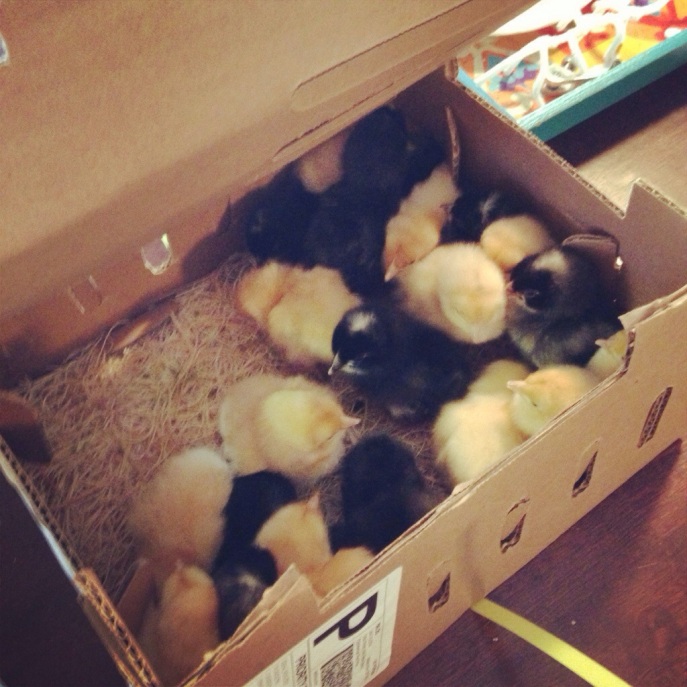 Whoa, hold the phone! I ordered 10 chicks, not fifteen, why do I now have 25 chicks cheeping in a box on my table? And better yet, what the heck do I do with them? Well the only sensible way to get your questions answered these days is by Google, so I Googled it and frantically called Aaron at work. After educating myself on day old chick care, and a run to the dollar store for a cardboard box, we were set up, heat lamp and all. After a call by Aaron to Ideal Poultry we found out why we had 15 extra chicks. Apparently when you don’t order enough chicks to fill the box they throw in some extra as “packing peanuts”. So, there we were, the proud owners of 25 chicks. They grew quickly 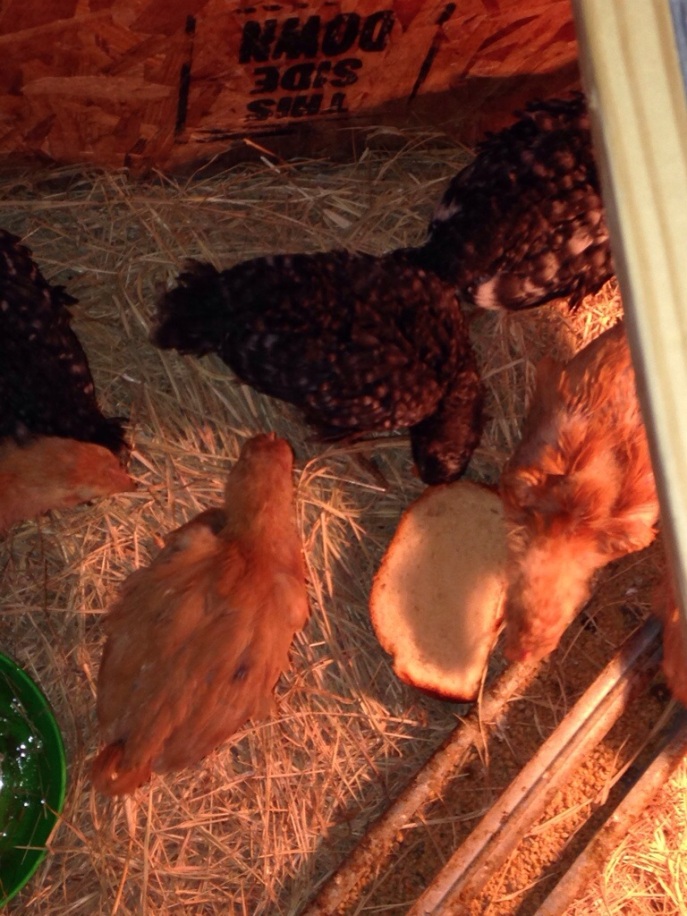 and at 3 1/2 weeks they got their first treat, stale bread. Before I knew it they were big enough to be out pecking and scratching in the backyard. 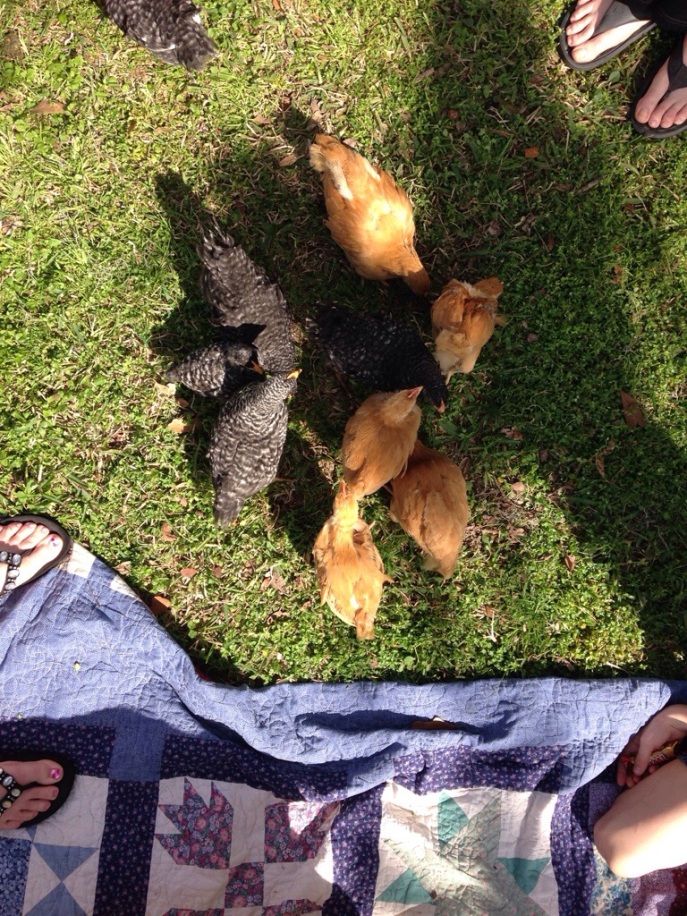 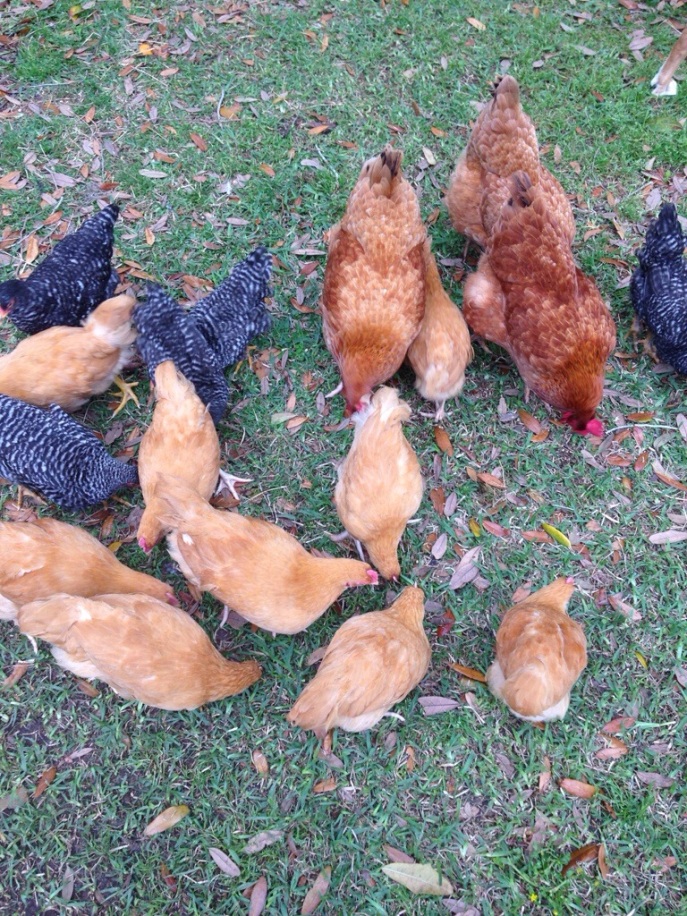 and I night we scoop them all up and put them in their cage. By the end of this week we should have a new hen house built big enough to hold them all. Very soon 5-6 of the Plymouth Barred Rock will be going to new homes, because I only ever wanted 4, and the yellow chicks, who I believe to be Buff Orpingtons and are supposed to be roosters, will go to their new home in my freezer. At this point I think I can safely say I’ve been successful raising my first chicks, with the exception of one my schnauzer got ahold of and one mysteriously found deceased in the cage.

It all started when I was a little girl. I used to scatter cat food out in the yard so my cats would gather around me and I’d pretend they were my chickens. Sounds like the beginnings of a chicken lady if you ask me. A few years ago my neighbors got chickens, then my husband wanted chickens. I said “no!”, I already had three kids, four dogs and four cats among other things to take care of. Then last year I got the bright idea to be more self sufficient, you know growing our own food and being a producer instead of a consumer. Of course the first thing you need is chickens. I checked out every book the library had on chickens. One day my next door neighbor’s daughter came over and said she was moving in with them and mentioned she didn’t know what she was going to do with her chickens. I didn’t hesitate for a second in offering to take them, but there was one problem, we needed a coop! So hubby got to work 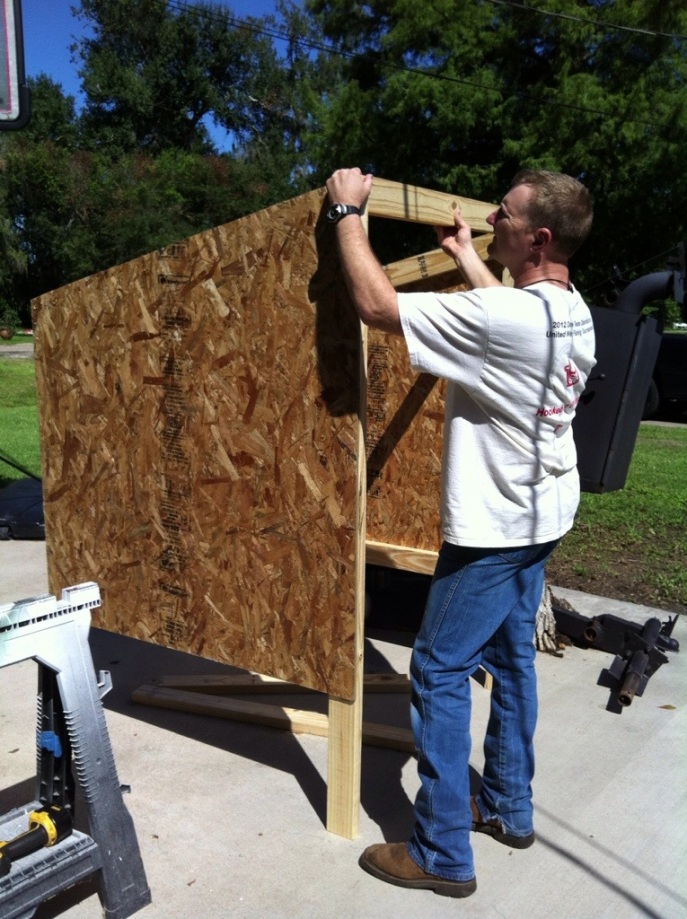 and we all pitched in. 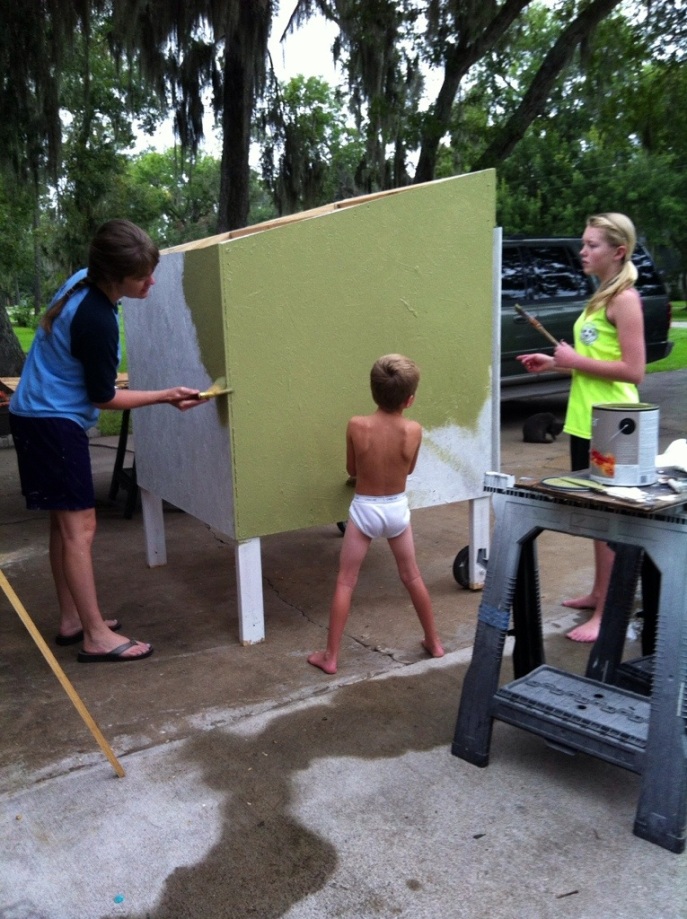 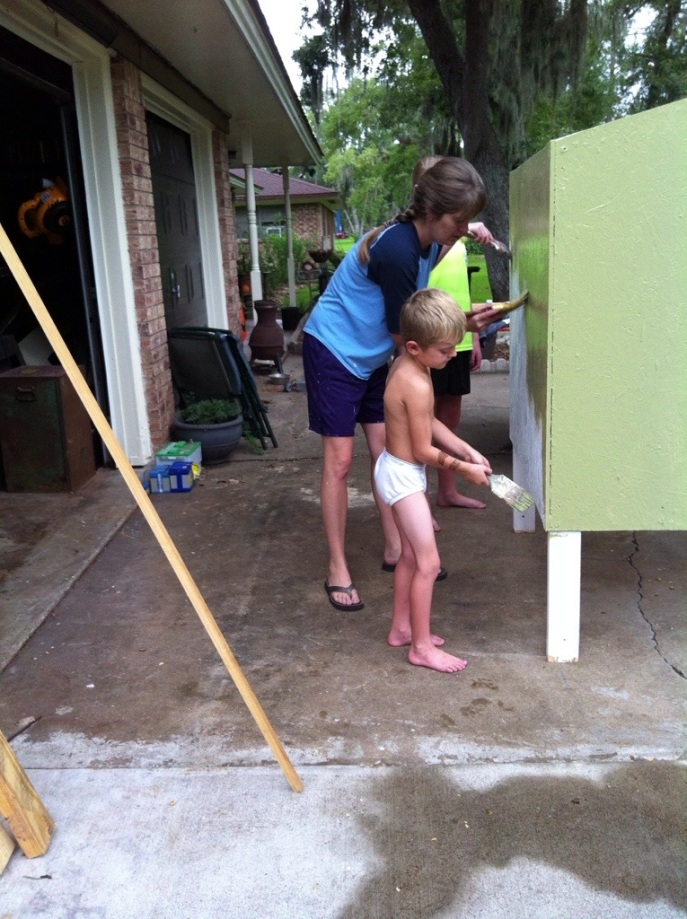 All of the neighbors thought we were building a deer blind. My husband hated my color choice but everyone else loved it so he lost. I’m always right when it comes to colors, when will he learn? After a couple of weeks it was time for the finishing touches

and viola! The finished product. 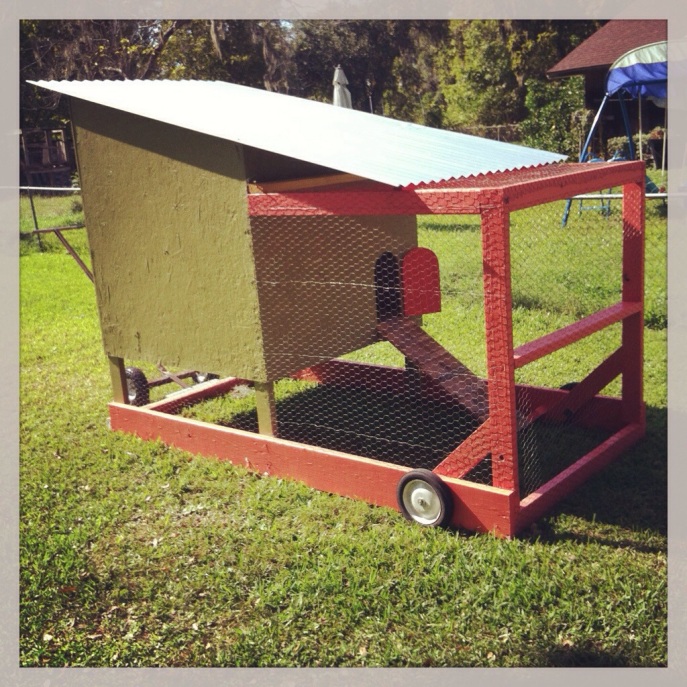 Now it was time to pick up our chickens. I had read the best time to move chickens was after dark so I set out with a dog carrier and a flash light. When I got there they were roosting in their hen house, happy as can be. Their current owner grabbed one and stuck her in the carrier while I closed the gate behind her. Then he wrangled hen number two and into the carrier she went. As he was trying to put number three in the carrier I heard something rustling behind me in the dark, I looked back and when I did I accidentally opened the carrier gate too far and then ALL of the chickens escaped. We went from almost three to zero in half a second. After chasing chickens around in the dark for what seemed like forever we finally corned one, loaded her up and I took her home. Before I left though we came up with a plan for the following night. Come the next morning our apparently traumatized hen wouldn’t come out. my anxious children waited not-so-patiently in their pajamas until around 1pm when she finally ventured out. We celebrated. That night our plan worked and we gathered two more hens. Then, if we weren’t already the most popular kid hang out in the neighborhood, we were now.
There was still one little hen left back at their previous house and my husband and kiddos made several attempts to catch her. The problem was she was onto us coming into her hen house and capturing chickens after dark, so she found herself another place to roost. We just had no idea where that was. Finally one night the whole family went over there, hunted her down, and my husband captured her out of her new roost in a tree. I swear it sounded exactly like she was shrieking “help! help!” With all four chickens settled into their new home there was nothing left to do but wait…..wait on the eggs.

Saturday my family was invited to the home of some new friends of ours from our homeschool group. They were hosting a gardening class with a couple of Master Gardeners, a veteran gardening neighbor and some other amateur gardeners like myself. I had the best time visiting and sharing with other folks of the same mind. We talked on everything from gardening, to politics, religion, homeschooling and child rearing. Even though we didn’t agree on it all, it made for some good conversation. I was even the second to last to leave. 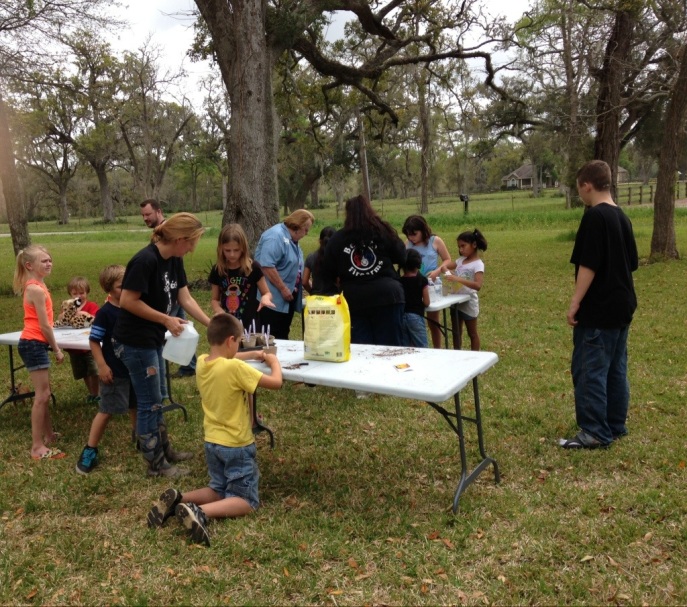 The children planted seeds and flowers to take home and since we stayed so long they even got to bottle feed the baby goats. 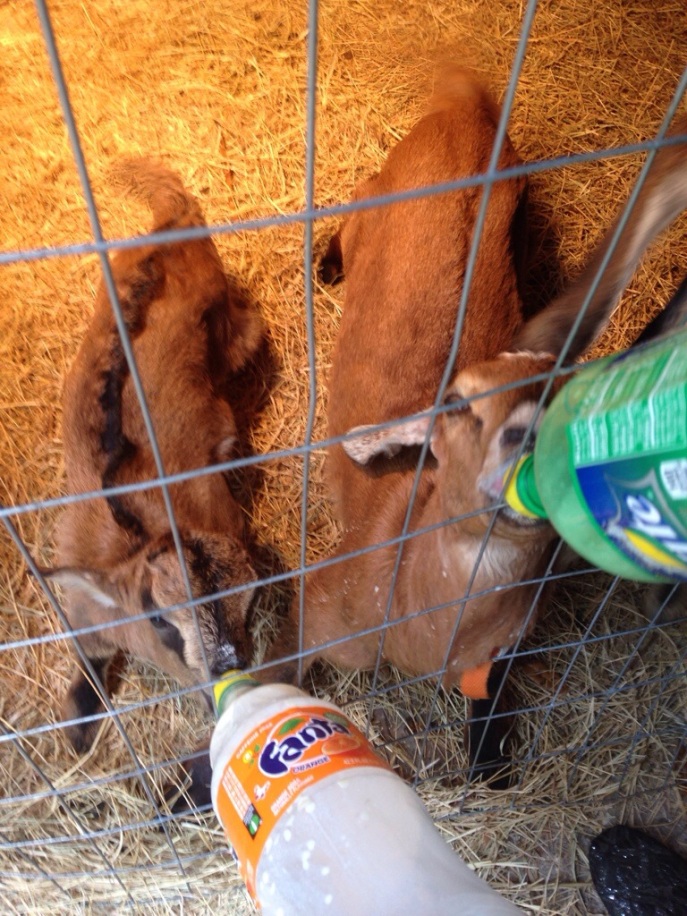 Our friends put in a Giving Garden at their home and we all helped plants seeds and starters. It was a great opportunity and I look forward to more meetings with my like-minded folks.

We are creeping up on the close of our seventh year of homeschooling. There are times I wonder if I’ve taught my children anything, but one thing I know for sure, I’ve learned so much. I’ve learned that I can teach them things all day but if they don’t know how to learn things on their own and develop a love for it, then I’ve failed. I’m a goal setter, planner, scheduler and very task oriented. My to-do list will become my idol if I’m not careful. What homeschooling has taught me is to chill out. See on days like today a science experiment inspired Reese to keep exploring what he could do with magnets. 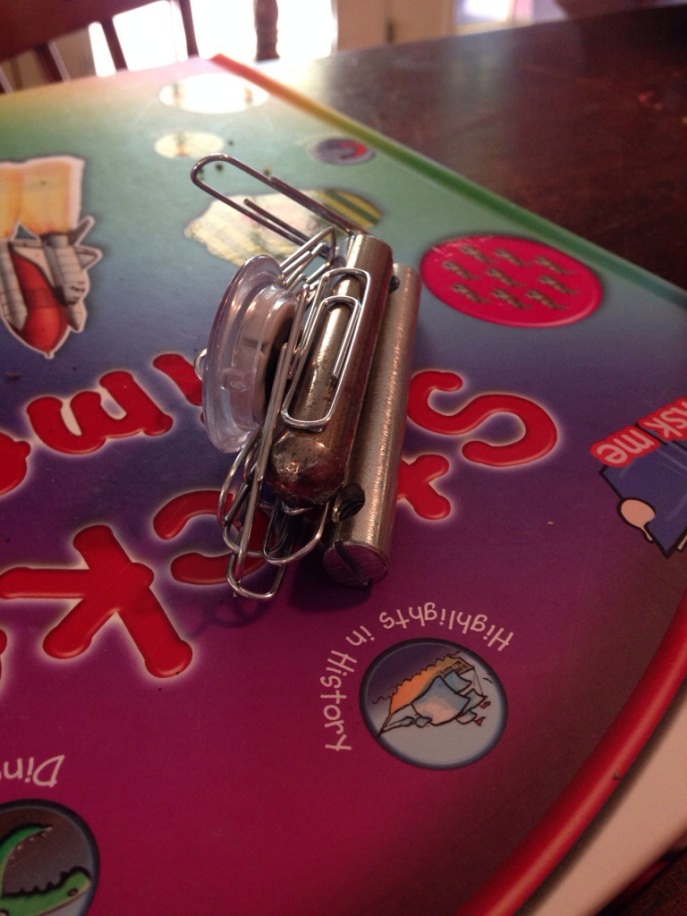 Free reading time led Raegan to read a book on science facts and Riley Grace a book on people and places around the world. 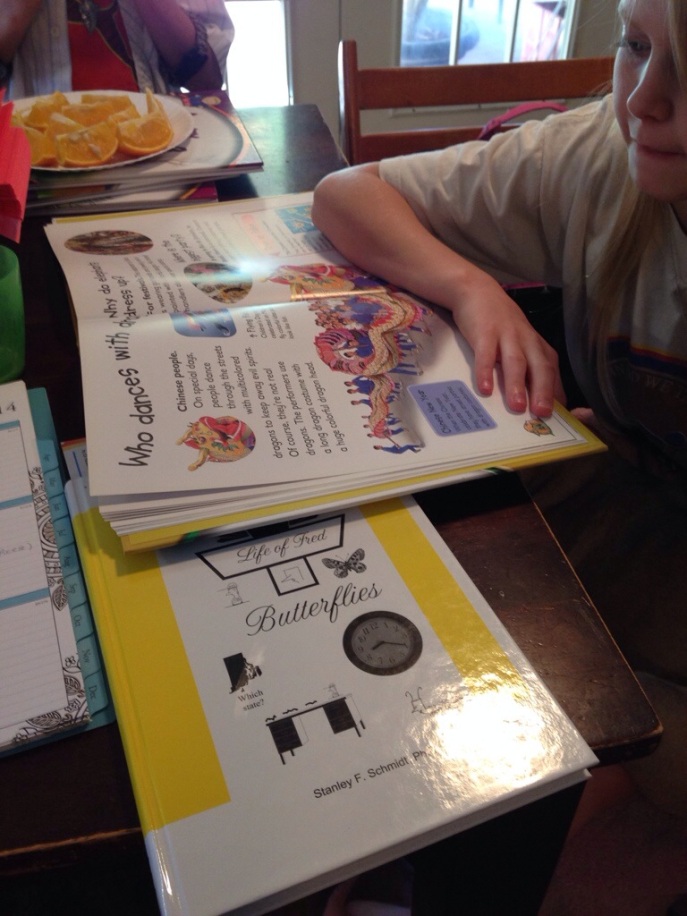 . The crazy scheduler/planner inside of me was thinking about the spelling curriculum that needs to be completed before summer break and how we’re behind in math. However, I know I need to let my children pursue their interests, it’s how they learn to learn. So I sit back, relax and enjoy watching them learn and listen when they excitedly show or tell me what they’ve discovered. This is just one of the many joys of homeschooling. The spelling will get completed and the math will get caught up, but not now, because we’re learning.

This past weekend we took a road trip to the Abiline area of Texas to visit my husband’s parents. My mother-in-law told me it’s considered “Big Country”.
I live along the coast surrounded by huge Oak and Pecan Trees, lush green grass fills yards where kids run barefoot almost year round. While in the “Big Country” my son ended up with a barefoot full of stickers and my daughter stepped on a cactus and the needles went through her shoe. I personally love the Texas Hill Country and long for it when I’ve been away too long. I adore the rocks and hills and clear rivers that rush through it. But this “Big County” is a place I haven’t visited much. At first glance it’s…well, it’s ugly. Brown grass, scrubby mesquite trees, cacti and dirt everywhere. During our hikes around my husband’s family land and adjoining property I discovered something…something beautiful. 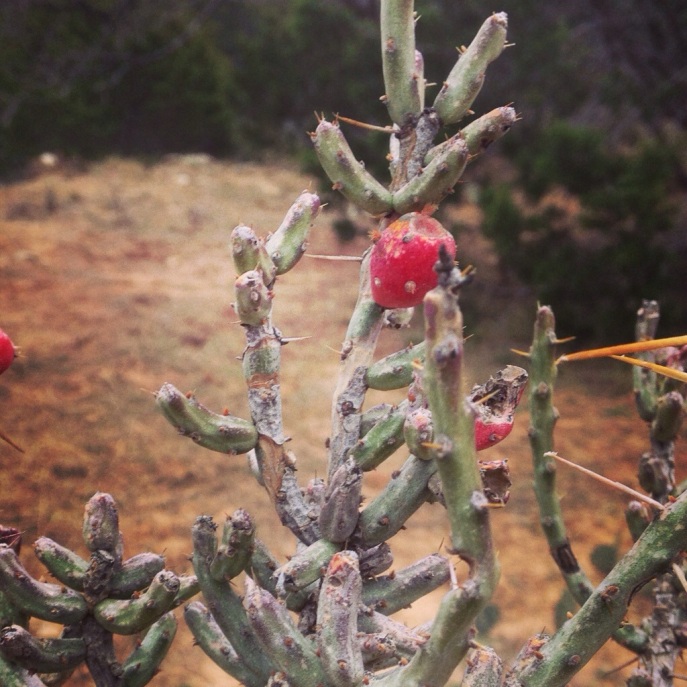 When I began to look more closely I was surprised at the beauty I found in things like that, and like this. 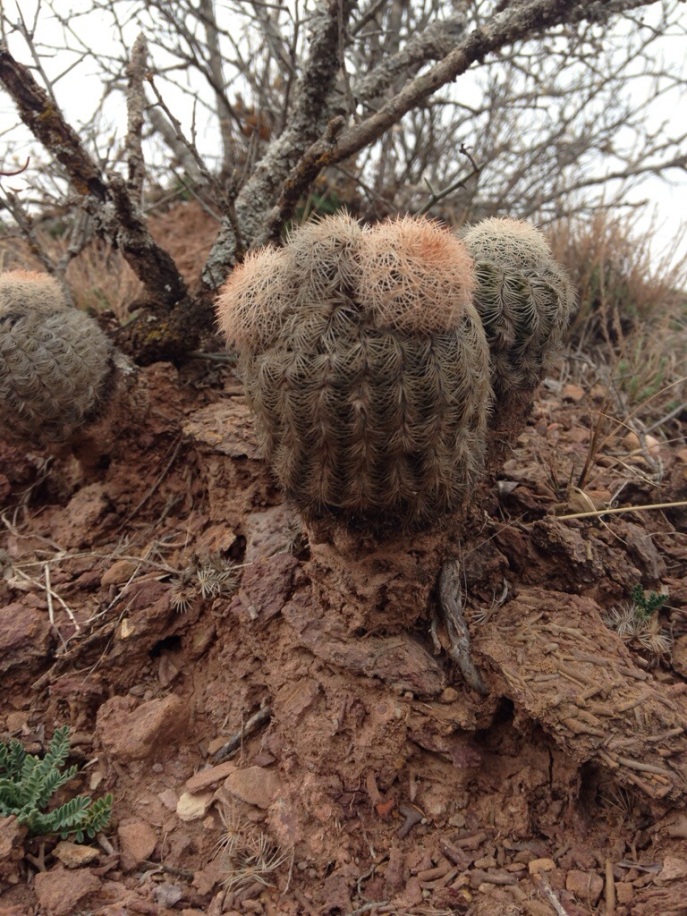 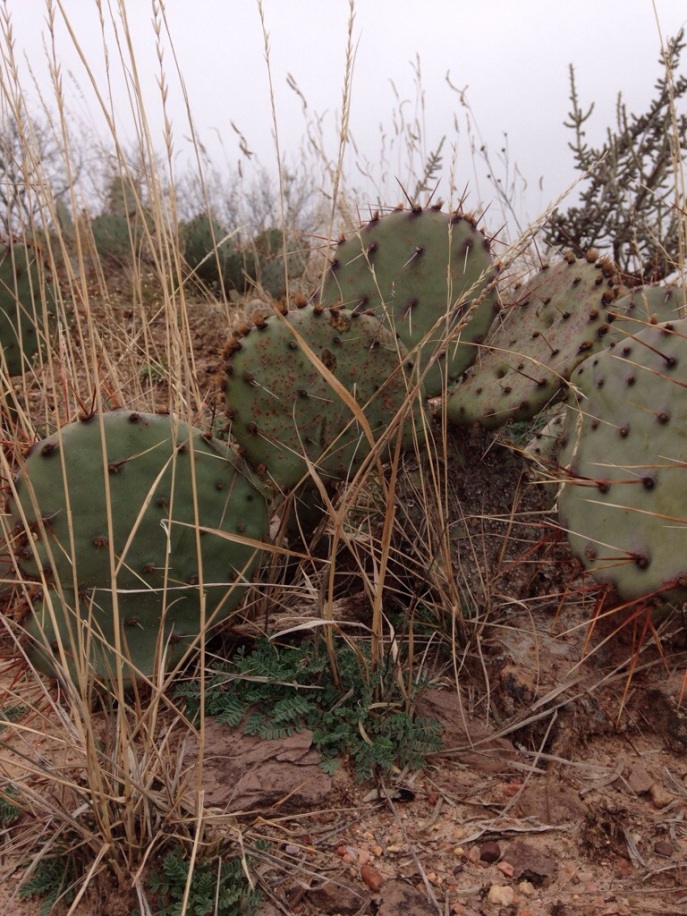 Then I began to think about the book I had just finished, One Thousand Gifts by Ann Voskamp where she talks about finding beauty in the ugly. Life is hard sometimes, but God has beauty strung throughout the ugliness that happens. It’s there, just not at first glance. It’s like this “Big Country”, you have to look a little harder to see it. In the midst of having loved ones all around me going through various trials, some unimaginable, some overwhelming, lots of broken hearts and confusion, I can hold onto God. Through all of the ugly I can’t forget to stop and look at the beauty because it’s always there, I just have to take the time to look for it. 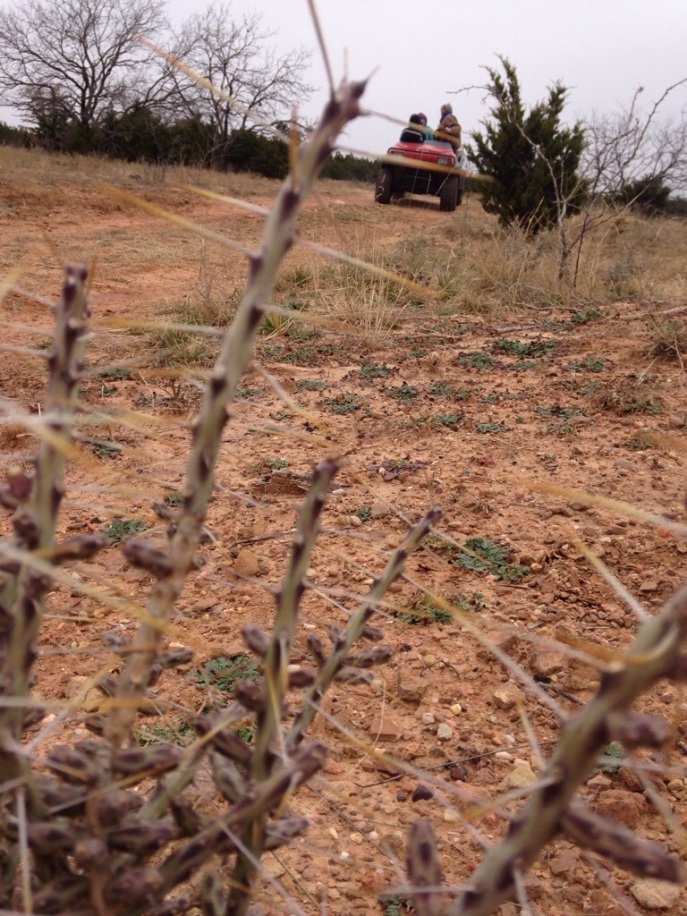 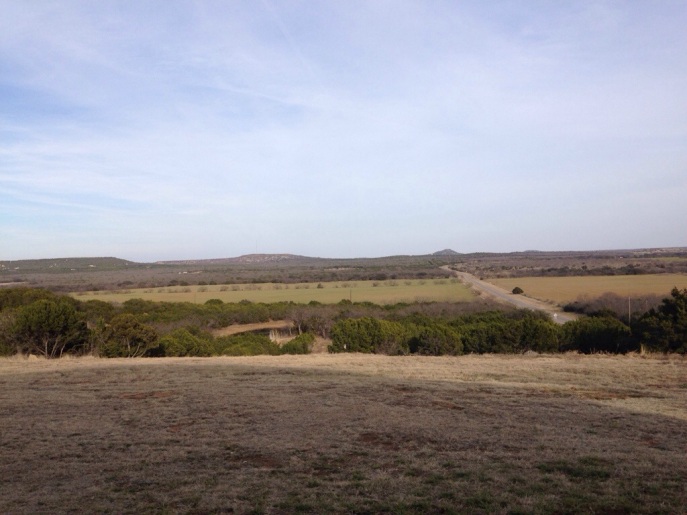